Everybody and by that I mean EVERYBODY who reads my posts knows that I have a blind spot for Historical Fiction. And historical fiction that is set in the backdrop of a small English village, during the early years of World War II – well, there is no way I am going to pass up that book! Hence, I was supremely satisfied to find The Chilbury Ladies’ Choir by Jennifer Ryan, when one day browsing through bloggingforbooks.com. 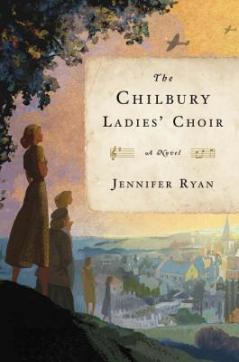 The novel opens in March 1940, with England beginning it’s initial foray into World War II and the Ladies of Chilbury Choir realizing that their singing in the church has come to an end, since the men, so very necessary to produce the right balance in the choir have left to join the armed forces. Each member of the choir has her own thoughts and reservation about this ending of their Choir singing. There is Mrs. Tilling, a widow and a nurse and one the premier members of the troupe; her concerns are divided into the worry of her son leaving for the front, the horrors that war will bring and of course the demise of the beloved choir which brought much peace to her. Then there is Edwina Paltry, the village mid-wife, guilt ridden by her past conduct that robbed her sister and herself of a good life; she is now desperate for a fortune, to ensure she can get away from the village and re-posses her old home with her sister and whose only motive of joining the choir is to use it as a means to her ends. Kitty Winthrop, the talented and precocious 13 year old daughter of the local gentry Brigadier Winthrop, who dreams of becoming a famous singer and leading a happily ever after life with the much older Henry Brampton-Boyd, who in turn seems to be infatuated with her elder sister, Venetia. Venetia, yet another member of the choir is a willful, pampered and bereft of any worries, 18 year old, seeking adventures and entertainment. Finally, there is Sylvie, the 10 year old refugee form Czechoslovakia who is troubled from the memories of a Nazi occupied homeland and a constant yearning for her family. The ending of choir leaves all the members at lose ends, with a sense of loss of something comfortable, in absence of singing when the new Music Teacher in the town,  Miss Prim starts the  revolutionary idea of  a women’s only choir, forcing the members into life changing situations, forcing them to confront their long held believes and do things that they never quite thought possible. As they all try and grapple with these changes, the meet and are forced to shape their lives around strangers who pour into the village, like the mysterious painter Mr. Slater, Colonel Mallard and the London evacuee, Tom.

This is a wonderful and delightful tale told in the form of diary/journal entries and letters exchanged and the narrative is well woven among the characters and the historical backdrop. Ms. Ryan is able to deftly portray the impact of the war on a small village community, balancing it well, with the more immediate concerns of its inhabitants. The life and concerns of the small community is extremely well captured. She creates some wonderful characters in Mrs. Tilling and Miss Prim and Sylvie. The way her characters evolve as the war goes on is very well done, especially when the way she manages to convey the changing belief system of her characters, from denial to tolerance to respect.  The slow sense of empowerment that comes through to the women of the choir as they stand up like never before is very well captured! I loved the way the author was able to intersperse the whole book with hymns and songs that were so apt for the occasion! The only call out I had was some of the events, which I thought were cliched and could have been managed better – for eg. from the moment, Kitty mentions Mr. Slater, I knew what he was about, as well as the way it would finish off. Similarly, I knew how Colonel Mallard would end up in the narrative, from the very moment he was introduced. Some of the interactions depicted are kind of jerky and jump from one emotion to other without sufficient reasoning of why it was happening and how did  the change come about; like the one between Mr. Slater and Venetia. The end also seemed to suddenly tie up neatly in a package, leaving one wondering about where did that come from. However despite, some of these flaws, the book remains a good read – a perfect anecdote to a hectic day, in the accompaniment of some good tea!

I understand from her website that the novel was based on the experience of Ms. Ryan’s grandmother who lived through World War II and shared her stories with the family.  The author does a wonderful job of taking these real life stories and turning them into fiction with enough dash of reality to make it believable and readable!

I received this book from Blogging for Books for this review.

4 thoughts on “All About the Ladies from the Choir”