I came across this poster a couple of days ago on some social networking site and while there was an humorous element to it, there can be no denying that it made me stop and think! 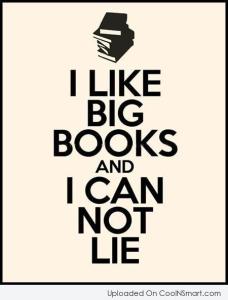 Seems like I have a tendency to really like fat books – the fatter they are, the more I seem to enjoy them. I am not sure if there is some psychological twist to the whole thing; maybe it’s about developing a comfort zone with a book or just that long tales with plots and twists that ultimately organize themselves into a plausible end could appeal to my sense of organization and triumphing over odds. I have no idea why I love fat books, but I do. It’s not to say that the short novels/books do not appeal to me – Pride and Prejudice by Jane Austen, Cranford by Elizabeth Gaskelland To Kill a Mocking Bird by Harper Lee are hardly sagas; but with the exception of these three and couple of more here and there, the books that have been formative in building my understanding and nurturing my love of literature have been mammoth works of fiction! Here’s a short list –

More recently I have began liking Gone with the Wind by Margret Mitchell and my first reading of The House of Spirits by Isabel Allende, page count 1076 and 593 respectively!

The average page count basis the above list is 1024 with the shortest novel consisting of only 601 pages. There are naturally books like Harry Potter and Terry Pratchett’s Discworld Series that have much smaller page counts, but they are more of on-going sagas. Also I believe my love for these two series is again influenced by among other factors like great plots, humorous writing, that I see the appearance of the same characters- there is a sense of continuity and sameness that holds the series together and perhaps again acts as a coming home/comfort zone for me!

I am not sure why this is the way it is, but do you have similar tendencies for certain types of books?